The euro has come under further pressure against the US dollar in today’s trading session, falling to levels not seen since early 2017 after a disappointing round of data from the Eurozone and Russian sanctions which has led to disruptions in gas supplies to Europe, renewing fears about an economic slowdown in the euro zone.

The figure hit the market at -1.8% MoM versus analysts’ expectations for a 2.0% drop and much worse than last month’s figure of 0.5%. On an annualized basis, the industrial output dropped by 0.8% in versus the -1.0% decline expected.

The Euro has now been under serious pressure against the greenback in recent weeks by a combination of fears for the economy suffering from the fallout of the war in Ukraine, and a resurgent U.S. dollar fueled by bets the Federal Reserve will embark on a round of interest rate hikes to reign in inflation which is sitting at its highest level in over 40 years.

Even though the European Central Bank is expected to lift rates out of negative territory this year, the difference in yields between the euro zone and the United States will remain wide by a significant margin.

It seems it is only a matter of weeks or even day before the Euro fall to parity against the US dollar which is a level we haven’t seen in over 20 years.

"The bottom line is that we can't accurately price the risk of a disruption to Europe's gas supplies, but if it happened, the risk of EUR/USD breaking parity would be substantial, and that keeps the natural urge to start building a long-term position in euros at bay," says Kit Juckes, FX Strategist at Société Générale. 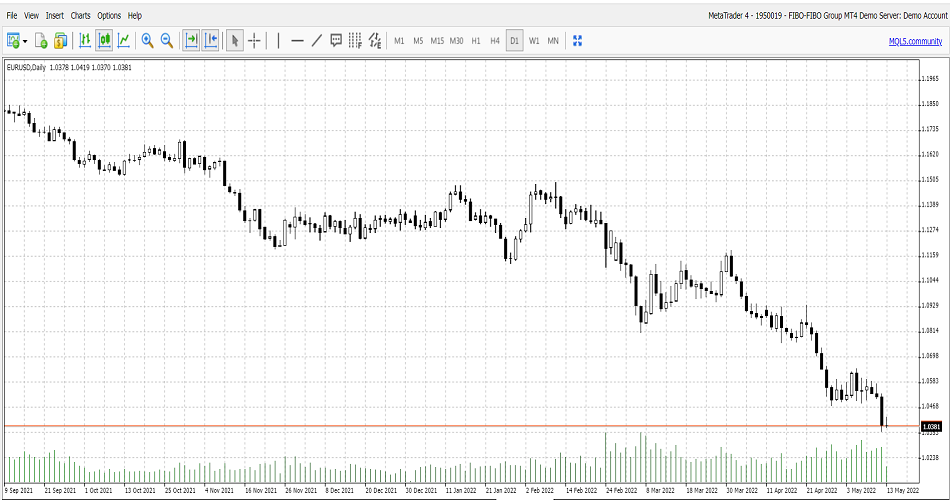 Looking ahead today, the main driver of the EUR/USD currency pair will be the release of the Michigan consumer sediment index later during the American session while investors will also keep an eye on any developments in the conflict between Ukraine and Russia.