The Euro has received an unexpected boost as we enter the European trading session after comments by a Central bank board member that rising inflation may continue for longer than first thought.

Only last week, the ECB decided to extend their stimulus program even though inflation is running sky high in the hopes that it would eventually fall as we enter the new year. The figure rose to 4.9% last month, more than twice the ECB's 2% target, and currently it is predicted that the number would be below target by the fourth quarter of 2022.

It seems not all members of the CB share the same views with regards to a drop in inflation and European Central Bank (ECB) policymaker and Slovak central bank Governor Peter Kazimir noted earlier today that Eurozone inflation may persist for even longer than the European Central Bank now expects and if that is the case, an extended period of added stimulus to the economy may not be warranted.

"What is true about Slovakia, is also true for the euro zone as a whole: there is a risk, and this risk is not small, that elevated inflation will stay with us for longer, if inflation outlook changes for 2023, 2024, ECB will have to act,” Mr Kazimir, told a news conference.

The more news that hits the market regarding an extended period of high inflation, the better it is for the Euro against the Greenback as the ECB will be forced to reduce or completely abolish their stimulus program and probably begin discussing the sensitive topic of interest rate hikes.

Looking ahead today, it is a relatively quiet day o the economic calendar and with no major news due out from the US, the major mover of the EUR/USD currency pair will be the release of consumer confidence figures from the Eurozone which are expected to hit the market at -8 against last month’s figures of -6.8. 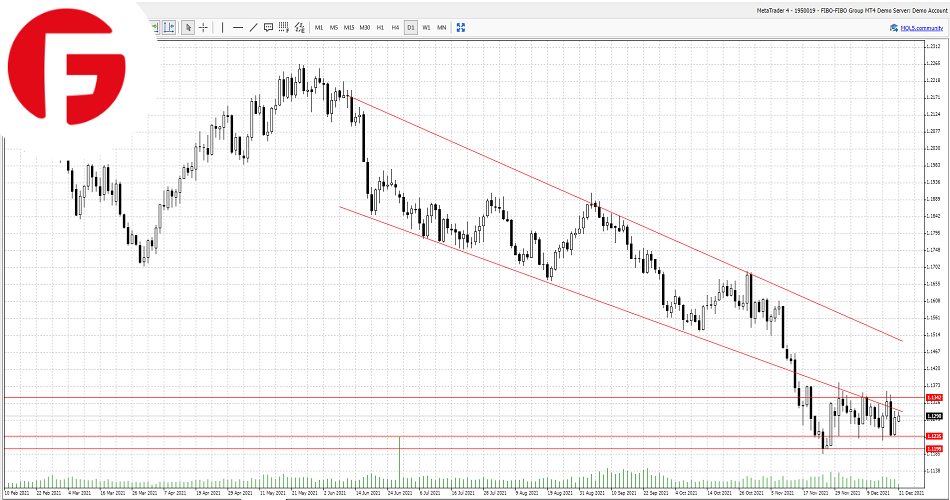 On the chart, we can see that once again the Euro has run into the familiar resistance levels which is the $1.1346 mark and the bottom line of the downward trend channel that begun in June.

With the holiday session fast approaching, which means thin liquidity, it is hard to see the Euro breaking these key levels before the end of the year and if it manages to do so, the chances of remaining above these levels seem pretty slim.

A strong set of GDP figures from the US which are due out tomorrow is likely to see the EUR/USD currency pair once again test the support level of $1.1235 as the market continues to price in rate hikes from the Fed.