The Euro took a major tumble in yesterday’s American trading session after a  bullish speech by US Federal Reserve President Jerome Powell set the stage for multiple rate hikes in the US as the year unfolds.

As expected, Federal reserve board officials left the US benchmark interest rate unchanged and kept their stimulus program in place until the end of march on track to end in March. However, chairman Jerome Powell's tone was more hawkish than expected as he primed the market for a rate hike in March which sent US yields and the dollar soaring weighing heavily in the euro due to the divergence between the two nations' central banks.

The reason for the hawkish view from the central bank president is the rising inflation figures, which are running at over 5% and are more than double the feds target rate of 2%. This has been caused by the various stimulus programs introduced to get the economy back on track after the Covid 19 pandemic which devasted the US economy for the best part of 2 years.

Now that the worst of the pandemic is seemingly behind us, the fed feels less inclined to prop up the economy.

"This is going to be a year in which we move steadily away from the very highly accommodative monetary policy we put in place to deal with the economic effects of the pandemic," Mr Powell noted in a speech following the interest rate decision

"The committee is of a mind to raise the federal funds rate at the March meeting assuming that the conditions are appropriate for doing so," he added.

Looking ahead today, we will see a range of economic news from both sides of the Atlantic as the main driver for the EUR/USD currency pair starting with the release of the consumer confidence survey from Germany. This will be followed up in the American session with the release of the Durable goods figures and GDP numbers from the US. 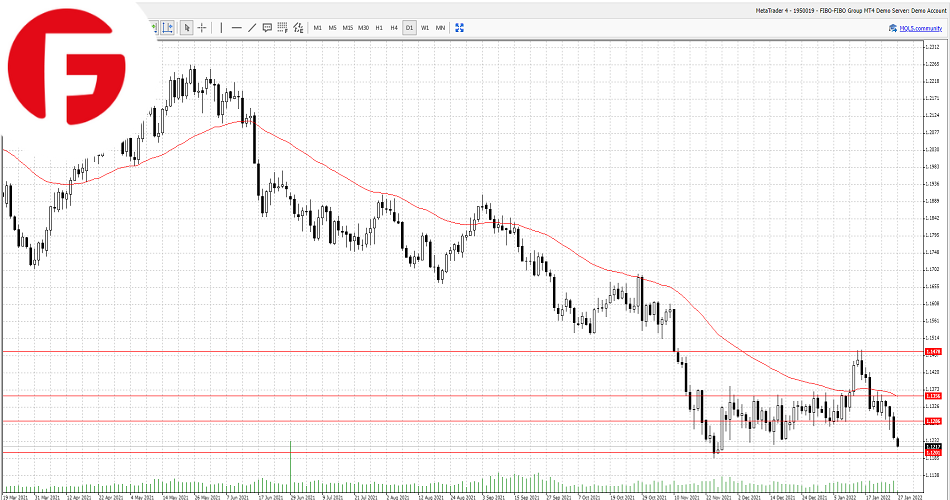 As we can see on the chart, the Euro is still under pressure against the greenback following yesterday’s press conference by the Fed and the EUR/USD currency pair is now very close to the all-important $1.1201 resistance level.

Should it break this mark, the sentiment surrounding the Euro is likely to get worse and we may see a further move down to the $1.1000 mark.